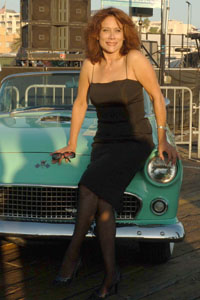 Grease fans were heartbroken when Jeff Conaway — better known as Kenickie — passed away in May after a long battle with drug addiction. Now, tragedy has struck the Grease family again: Conaway’s co-star Annette Charles passed away yesterday after a battle with cancer. She was 63.

She had one memorable line in the film.

“They call me Cha Cha because I’m the best dancer at St. Bernadette’s,” she purred.

“Annette had recently started having difficulty breathing… and when she went to the doctor she learned that she had a cancerous tumor in one of her lungs,” a family friend told TMZ of her recent health struggles.

Charles went on to roles in other Hollywood productions after her stint in Grease, including parts in The Bionic Woman, Barnaby Jones and Emergency. She later became a speech professor at California State University Northridge.

At least her legend lives on in Grease.