Bear Grylls’ son, Jesse, is following in his father’s wildly adventurous footsteps. The seven-year-old recently saved the life of a young friend! 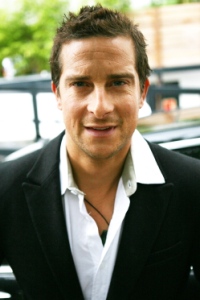 Bear Grylls is sharing the tale of his son’s river rescue as any proud father would. The Man vs. Wild star explains his seven-year-old son Jesse and his young friend were playing in the water when she started to struggle.

Bear Grylls tells the Daily Mail, “They were in a little base in a stream and she fell in.”

“And — I wasn’t there, you know, and the story grows and grows every time he tells me — but he did rescue her and he was proud as punch to have dragged her out.”

While Bear Grylls is understandably proud of son Jesse’s heroics, he’s also worried that the boy and his brothers (five-year-old Marmaduke and five-year-old Huckleberry) might follow too closely along his unrealistic career path.

“Their headmaster took me aside and said ‘It’s great that they might know how to take the door off a helicopter and deal with a snake bite, but it would be really great if they focused a little more on the mathematics.’ I’m kind of feeling that at the moment.”

Grylls continues, “I guess I’m lucky I don’t work in an office, but all I’ve been able to do in my life is to be able to climb big things. It might not work out like that for my kids. That’s why I’m trying to say to them ‘Listen, you don’t want to do my job.’ They say: ‘We do.’ And I say: ‘No, you don’t.'”

Lucky for the young friend who is safe and sound on dry land, Jesse isn’t taking too much of father Bear Grylls’ advice to heart!