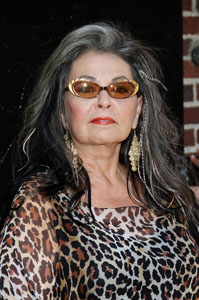 Roseanne Barr is running for president in 2012, the comedian and actress announced on The Tonight Show with Jay Leno last night.

The Roseanne’s Nuts star says she wants to be the next leader of the free world.

“You know Jay, I decided that since you’re the one that got Arnold Schwarzenegger elected as governor of California, that I wanted to make my announcement here on your show because I really wanted to ask for your support,” said Barr, 58. “My announcement is that I am running for president of the United States.”

“… and also prime minister of Israel. It’s a twofer.”

What is Roseanne’s platform? She says she will eliminate taxes, forgive all student loan debt, legalize marijuana, and abolish money in favor of a national barter system — mostly all implausible, but it sure sounds good. She even created her own party: the Green Tea Party.

Watch Roseanne Barr announce her run for president on The Tonight Show: