Had Sofia Vergara not become an actress, what would she be doing today? The 39-year-old has revealed her alternate career ambition in the latest issue of Redbook.

Sofia Vergara is talking boobs, babies and pipe dreams in the latest issue of Redbook. If acting hadn’t worked out for the curvaceous Modern Family star, she certainly would have made one hot… 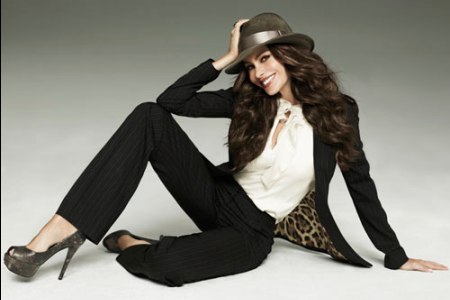 On Life as a teen mom:

Sofia Vergara: “When I had Manolo, I was 19, and I had the energy for everything,” she says. Vergara married Manolo’s dad, her childhood sweetheart Joe Gonzalez, when she was just 18. The couple divorced two years later.

“My boyfriend now wants to have kids, and I don’t even want to think about it. I would have to get into that mindset again, the waking up early.”

On boobs and body image:

“I’ve had these ridiculously huge boobs since I was super young. Like, 13. I was really skinny at that time, so it was weird to have those f–king boobs and be skinny. It was hideous. Then after I had my kid, I got hips and everything started to come together,” she adds.

writing for her Modern Family character:

“When Modern Family was just beginning, I’d have to tell the writers what I thought would be better for me to say. Most of them are American men, so to write for a Latin woman is not as natural for them as writing for Julie [Bowen], for example. Because they have wives like Julie, sisters like Julie, you know what I mean? But now they’re so good, they’re like hot Latin girls!”

On son Monolo teasing her:

“He humiliates me! He doesn’t understand how my accent can get worse and worse. He says, ‘It’s not normal. Nobody does that.’ So when I got nominated for the Emmy [in 2010] I called him and said, ‘Right in your face! Even with my accent!'”

If she hadn’t become an actress?

“What I really wanted to be was a doctor. I love medicine. Everybody calls me all the time — ‘I have this condition, what do I do?’ But you have to study for 10 years. I knew I couldn’t do that, so I went for the next best thing, which was dentistry.”

Check out the September issue of Redbook for more with Sofia Vergara!