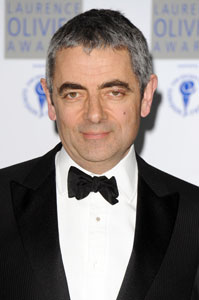 The comedian careened off the road, spinning several times before smashing into a tree and a road sign. The car then caught on fire, landing on the opposite side of the roadway.

Atkinson has surprisingly few injuries considering the severity of the crash. He suffered a fractured shoulder blade and has been released from the hospital after spending the night.

The $1 million F1 McLaren is one of the fastest street-legal road cars in the world, and one of the rarest with only 100 in existence — well, 99 now — but it could be fixable.

A McLaren spokesman said, “Our first concern was Rowan and we’re pleased that he is stable.”

“We are discussing with his team about bringing it back to assess the damage and look at repairing it. It has a carbon-fiber chassis, which is more reparable than normal cars.”

Rowan Atkinson passed a breathalyzer test and will face no charges in the crash.