Before playing Buffy the Vampire Slayer, Sarah Michelle Gellar appeared on the ABC soap All My Children. She originated the role of Kendall Hart, the illegitimate firstborn child of Erica Kane. With the show doing dark in just a month, Gellar’s returning to her Pine Valley roots. 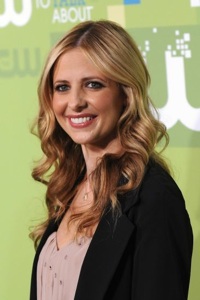 Sarah Michelle Gellar played Kendall Hart on All My Children for two years during the mid-’90s. Her character was a young vixen, whose sole purpose was making Erica Kane (Susan Lucci) miserable. Hart was given up for adoption at birth and she had her fair share of abandonment issues.

When Gellar heard about the cancellation of All My Children, she along with several other stars including Josh Duhamel (Leo du Pres) and Eva La Rue (Maria Santos Grey) reached out to support their alma mater. All three actors have signed on to return to the show, but Gellar is the only one who won’t reprise her original role.

Kendall Hart was recast in 2002 with another actress named Alicia Minshew, who’s still playing the part. Gellar believes that Minshew owns the role and doesn’t want to steal her thunder (classy lady), so she’s agreed to do a cameo as another character.

According to the Los Angeles Times, while promoting her new series, Ringer, Gellar revealed, “When I heard that the show was cancelled, I didn’t understand. It just doesn’t make any sense to me. So I called [the casting director]… and said I wanted to do something.”

Gellar’s air date hasn’t been released but All My Children is scheduled to end Sept. 23.