In Christopher Nolan’s The Dark Knight Rises, Anne Hathaway is Catwoman Selina Kyle. It’s been several years since the villain has appeared on the big screen and now it’s time for her big return! 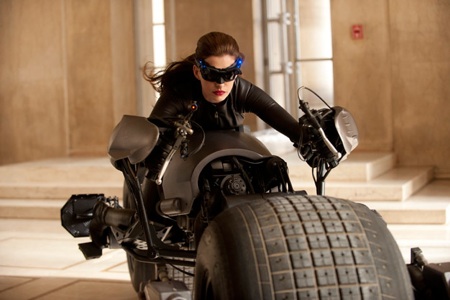 On Thursday, Warner Brothers gave us our first look at Henry Cavill as the new Superman and today they’re doing the same for Catwoman. Anne Hathaway is dressed in all black and ready for business in this high-octane photo from The Dark Knight Rises.

Selina Kyle is the government name of the jewel thief and love interest of Bruce Wayne. In the comic books, her alter ego Catwoman and Batman have a love-hate relationship. She’s a career criminal, he’s a vigilante hero — and they’re always on opposite sides of the law.

The last time their relationship was successfully explored on film was in 1992’s Batman Returns, when Michael Keaton and Michelle Pfeiffer played the roles. This time, Hathaway’s Catwoman will have her hands full with the tall, dark and handsome Christian Bale. And let’s be honest, that’s not a bad gig to have.

Judging from this photo, Kyle is in catburgler mode as opposed to Catwoman. The suit and goggles look like the humble beginnings of what will become her full-on costume. But do you know what the most interesting thing about this image is? She’s riding Batman’s Batpod! Now, how did she get her hands on that?