Chris Hansen has been caught cheating on his wife again — this time with a Las Vegas stripper, says The Enquirer. 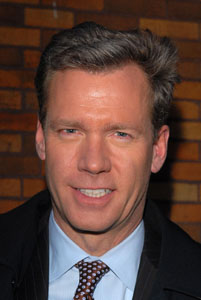 You’d think that when your job is to catch would-be perverts on tape, you’d be a bit cautious about your own behavior. Failing that, you’d think that if you were caught once cheating on your wife on tape, you might learn a lesson and not do it again.

Chris Hansen did not learn that lesson.

The host of To Catch a Predator has been caught cheating again, barely over a month since his first affair was discovered.

According to The Enquirer, the married father of two has been seeing Kathleen Collins, a stripper he met in Las Vegas, for six months — overlapping with his other mistress, Florida news reporter Kristyn Caddell.

“I know this sounds crazy, but Kathleen really thought she was the only one,” says a friend of mistress number two.

“Kathleen feels like she’s been used and betrayed — Chris definitely broke her heart.”

But a friend of Hansen’s says the new accusations are wrong. “This is just ridiculous. It’s crap.”

“They’ve been friends for a long time, and there’s no truth to this,” the friend added.

How would you feel about your husband — who has already been caught cheating once — being “friends for a long time” with a stripper?