Kat Von D called the wedding off, but two clues suggest she could get back together with Jesse James. 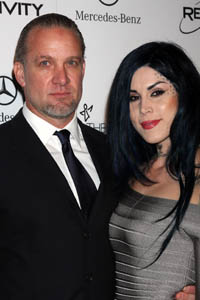 Kat Von D and Jesse James could be quietly reconciling. Kat and James broke up just days before they were supposed to get married, but it’s possible that watching their relationship play out on TV is what will propel the celebrity duo back into each other’s arms.

In a recent tweet, James wrote to Kat, “*sigh,*” and included a link to an image that appeared to be a screen grab of the two together in happier times on Von D’s TLC show, LA Ink. The show has been focusing a great deal of air time since this season debuted on their relationship. In the picture, Von D can be seen with her arms around James and kissing the troubled star who famously cheated on ex-wife Sandra Bullock.

In response, Von D tweeted back enigmatically, “…” That small exchange has led others to wonder if Von D is leaving the door open for the heavily tattooed pair to reunite. It seems to suggest that the two are communicating and share a fondness for what they had. But will they give it another go?

One problem is that James lives with his kids in Austin, Texas, and Von D is based in Los Angeles, California, where her tattoo shop is located and her show is filmed. Even if they were to overcome that hurdle, James doesn’t seem like a very likely candidate for being able to keep it together in the long-term when it comes to relationships.