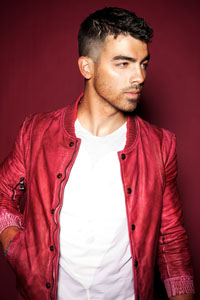 It’s a match made in pop music heaven: Joe Jonas will join Britney Spears for several dates on her European tour, taking over for rapper Nicki Minaj as the opening act.

“I’m really looking forward to being part of this,” Jonas said after the announcement. “It’s a dream come true.” The smaller shows he’s been playing over the past several months in New York and Los Angeles were the singer’s warm-up for his big jaunt to Europe.

“I’ll be playing more music than I have the past few times I’ve performed live so far. It’s going to be really fun to perform some of my music from the album,” he told People. The concerts will serve as great promotion for his debut solo album, Fastlife, out Oct. 11.

The singer even revealed that he used to have a crush on the pop superstar.

“She was the first girl I ever had a poster on my wall of, and her album was the first CD I ever bought,” he revealed. “It’s so funny to think I had that on my wall and here I am about to perform with her.”

Joe Jonas will also join Britney Spears for a concert on Aug. 5 in East Rutherford, New Jersey. His reps tell us he’ll be making appearances at the Teen Choice Awards on Aug. 7 and perform on Lopez Tonight on Aug. 8.

How do you feel about the joint Britney Spears/Joe Jonas tour?

Read on for more Joe Jonas