Kelly Osbourne says the heck with the economy: Kate Middleton deserves a new dress every day! 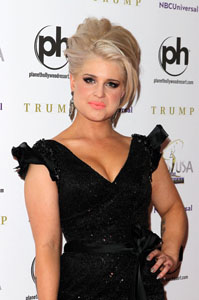 Kate Middleton has been applauded for recycling her wardrobe — but outspoken Fashion Police host Kelly Osbourne says she’d have new duds every day if she were a royal!

Osbourne is being reported as being critical of the Duchess of Cambridge in her appearance on The Tonight Show with Jay Leno, but if you actually listen to what she says, she believes Kate Middleton actually deserves all the new clothes she wants.

“In England they’re like, ‘Look how thrifty she’s being, showing the British public that the royals are in a recession as well,'” Kelly Osbourne told Leno.

“If I had that job I would only wear it once,” she said. “If I am going to be the future bloody Queen of England I’m going to wear that dress once because I’m giving up the rest of my life, all of my privacy. At least I can get a new dress every day!”

Now if you want to read a real insult, check out how Kelly Osbourne slammed Christina Aguilera on Fashion Police for her weight gain.