Tonight is the premiere of Jersey Shore. Are you ready to see the gang back in action — in Italy?

The wait is finally over! Tonight marks the premiere of Jersey Shore Italy — the fourth season of the MTV show we all love to hate. So, what can we expect from Snooki, The Situation, Vinny, and the gang? More of the same shenanigans we’ve grown to love, including lots of fights, hook ups and pizza-making. 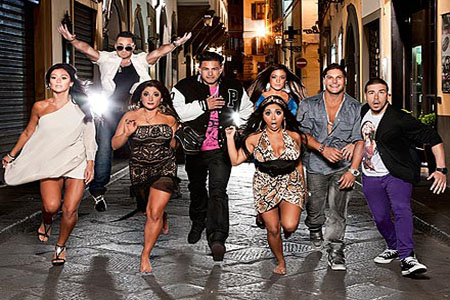 Ronnie and The Situation get into a serious fist fight too — we’ve expected this for a while, though.

The one thing we aren’t seeing? Ronnie and Sammi fighting! Unless they’re just keeping that out of the trailers and clips, because everyone is so over seeing them duke it out over stupid stuff.

Pauly D had one big complaint while they were in the Italy filming: It was hard to tan!

“You have to tan at a nail salon out here,” the spiky-haired DJ told Good Morning America earlier this summer. “This is the palest I’ve ever been!”

Their skin probably thanked them for that reprieve from the intense UV rays.

We’re getting our Ron Ron Juice ready and re-watching some of our favorite Jersey Shore episodes in anticipation of tonight’s throwdown.

Are you excited for Jersday?