Redmond O’Neal has been charged with two very serious felonies in the wake of his most recent arrest.

When Redmond O’Neal was arrested after a traffic stop, we knew the charges would be serious — but this kid is in majorly deep doodoo. The son of Ryan O’Neal has been charged with felony gun possession and felony drug possession — accusations that could send him to prison for years. 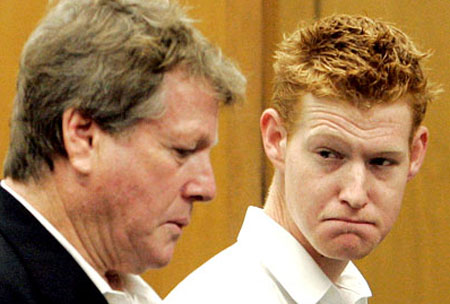 The gun complaint against Redmond reads:

“A felony, was committed by Redmond James O’Neal, who did unlawfully own, possess, purchase, receive, and have custody and control of a firearm, to wit, handgun, the said defendant having theretofore been duly and legally convicted of a felony or felonies.”

Redmond is already a convicted felon, meaning it is illegal for him to own a gun in the state of California.

Farrah Fawcett‘s troubled son was also charged with possession of a controlled substance — another felony — when cops found heroin in his car. His lawyer is expected to ask the judge to release him on bail to a residential rehab facility during his arraignment today.

Redmond’s father Ryan O’Neal and half-sister Tatum O’Neal currently appear in the reality show The O’Neals on OWN.

Kate Middleton Shares Never Before Seen Photo of Princess Charlotte, Says It ‘Means So Much’ to Her