Demi Lovato is talking to ELLE magazine about what led up to her breakdown and stint in rehab. Hint: It wasn’t her breakup with Joe Jonas. 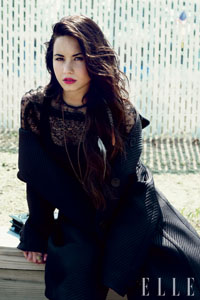 Ever since Demi Lovato got out of rehab last winter, the Disney star has been refreshingly honest about what got her there in the first place. That candid nature continues in a new interview with ELLE.

This time, she’s specifically talking about the punch heard round the world: The day she punched her backup dancer in the face for ratting her out about the previous night’s partying. But, she says, her bad attitude started months before.

“I was completely out of line all summer,” Lovato told ELLE. “Just the worst attitude — totally ungrateful.”

“I just felt like she’d betrayed me,” she said of the dancer. “That’s the bottom line.”

“When you punch someone on a plane, enough is enough,” she said. “Right after, I texted my mom and just said, ‘I’m sorry.'”

Demi Lovato settled out of court with the Alex Welch after the dancer threatened litigation.

The Skyscraper singer says the emotional breakdown was caused by her issues with eating disorders, self-mutilation and bipolar disorder II — not her split with Joe Jonas.

“I wouldn’t credit my meltdown to a guy. There was so much other stuff in my life.”

Read the entire interview on ELLE.com

Demi Lovato is still a work in progress

Is Demi Lovato hooking up with Ryan Phillippe?