Octomom Nadya Suleman is talking about another mother in the news: Casey Anthony. 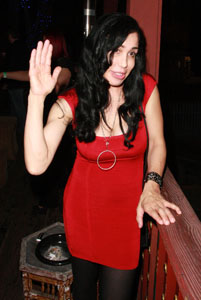 Octomom’s own mental stability has often been questioned since she had 14 children through in vitro with no parenting partner in the picture and no way of financially supporting them. Now Nadya Suleman is pointing her crazy finder at another notorious mom: Casey Anthony.

“The whole [Casey Anthony] case makes me nauseous. It makes me sick,” Octomom told Steppin’ Out magazine, echoing the sentiments of pretty much the entire news-watching world.

“The thought that Casey Anthony would even entertain the idea of harming her child makes me sick.

“I don’t have all the facts, but I’ve worked with the mentally disabled for many years before having kids. I worked with sociopaths and psychopaths in a mental hospital and in my opinion Casey Anthony is not emotionally stable,” she said.

“If something happened and she really did do something to her child I believe it would be related to her mental illness.”

Casey Anthony has been ordered to return to Orlando and report to her probation officer after a misunderstanding in court. Her lawyers said she will be undergoing treatment to deal with her “obvious mental issues” after her acquittal on murder charges in the death of her daughter, Caylee.

The only therapy Octomom has undergone is a stern talking-to by Dr. Phil.

read on for more octomom