Thought the relationship between 16-year-old Courtney Stodden and 51-year-old Doug Hutchison couldn’t get creepier? Well, her mom just raised the creepy factor to 11.

Are you eating? If you are, please come back to this story once your food is fully digested. Otherwise, you might just lose it over this: Courtney Stodden’s mother revealed to RadarOnline that her daughter is on birth control. 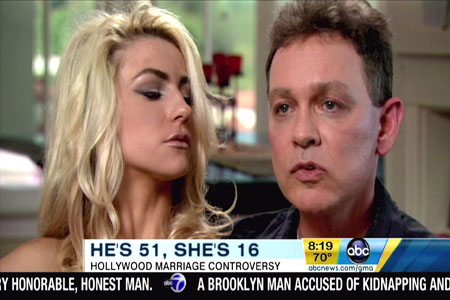 You know Stodden: she’s the 16-year-old girl who actually looks like she’s about 40 and married that creepy Lost actor, Doug Hutchison.

Mother of the year Krista Stodden was actually the person who recommended that Hutchison, 51, marry her teen daughter after a four-month online courtship.

“It was Krista who said, ‘You know, you guys could get married if you want. There are ways to do that. There are certain states,'” Hutchison said in an interview with Good Morning America.

So, are the sweet-and-innocent couple planning on having a family soon?

“She’s making sure as much as she can at this time that it isn’t happening,” Krista Stodden said.

“She’s on birth control because she would prefer to wait for children,” she added. “I think Doug would love to have children, but Courtney wants to wait a few years.”

Young Courtney would have the baby if she did get pregnant, though.

“If something happens, we do not believe in abortion, so if God blesses them that would be OK, but they’re not trying for a baby now,” Krista said.

Remember, the bride said she was a virgin when she married Hutchison. Now they’re talking birth control and children? Something really isn’t right here — and Courtney is the victim.

Do you think this relationship is going to last?