Val Kilmer’s ex-wife alleges that the gifted actor owes her a ton of money in child support for their two children. 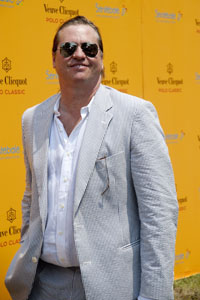 Val Kilmer might be a great actor, but he leaves a lot to be desired when it comes to paying child support on time — or so says his ex-wife.

Kilmer’s ex-wife Joanne Whalley filed to have a lien put against the actor’s New Mexico ranch, according to TMZ. Whalley alleges that her ex-hubby has failed to hold up his end of a $27,500-per-month child support deal.

That’s more money than a lot of people make in an entire year!

The pair — married from 1988 to 1996 — has two children together. One child is a legal adult at 19, while the other is still a 16-year-old minor. The court documents — obtained by TMZ — don’t detail how much he’s behind, but it probably wouldn’t take much at that sort of per-month payment.

Read on for more celebrities that have tax problems>>

Whalley had to sick the tax lien dogs on Kilmer before — she filed suit in 2007 when he fell behind. Maybe he’s just mad at her for filing for divorce? He told ELLE in 2006 that she’s the only person who has ever dumped him.

“It’s just about 100 to 1,” the actor said of his dumper-to-dumpee ratio. “But women are so clever; maybe I got dumped and didn’t know it.”

“I was visiting Marlon Brando in Ireland, and I turned on CNN and found out my wife had filed for divorce. She took the kids and moved to a different state. I guess that counts as being dumped,” he said.

Ouch. You still have to pay up, Val.

Do you think Val Kilmer should be forced to pay up?