It’s a bird, it’s a plane — it’s Henry Cavill as Superman! Warner Brothers has released the first photo from Zack Snyder’s man of steel that features Cavill as the iconic superhero. And yes, he’s wearing the costume! 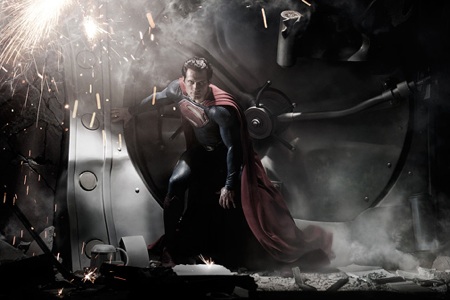 Henry Cavill is the new Superman and today he’s marking his territory. Warner Brothers finally released a photo of the actor dressed in the famous red and blue suit and fans are going wild. It’s not an image taken from the movie Man of Steel, but it’s a promo shot used to introduce Cavill as the new man of steel.

Cavill recently spoke to TotalFilm about the first time he wore the suit and the pressure that came with it. It’s a daunting costume that’s almost iconic as Superman himself.

“They just put it on, I turned around and look in the mirror and you can’t really play it cool – you sort of guffaw and laugh. I thought ‘OK, holy hell, this is real, it’s not a joke anymore. This is it…you’re doing it, you’re right in the middle of it,'” said Cavill.

Man of Steel was initially scheduled to hit theaters in December 2012, but Warner Brothers pushed the release back to June 14, 2013. That means we’ll have to wait almost two years before we get to see Cavill in action. But since they’ve obviously jump-started their marketing so early, we’d love to see the first photo of Amy Adams as Lois Lane!