Kelly Osbourne took the gloves off and is punching bare-fisted in a bitter feud with Christina Aguilera. 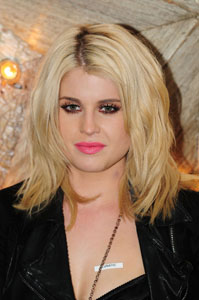 There is no love lost between Kelly Osbourne and Christina Aguilera. The newly slender star of Fashion Police called the singer some pretty nasty names on a recent episode, and she says it’s because Aguilera was cruel to her for years.

After co-host Joan Rivers said Aguilera looked like “Snooki’s Scandinavian cousin,” who was “stuffed into” her dress, Osbourne let the insults fly.

“Maybe she is just becoming the fat [expletive] she was born to be. I don’t know. She was a [expletive] to me.”

“She called me fat for so many [expletive] years,” she continued, “so you know what? [Expletive] you, you’re fat too.”

Definitely not nice, and actually quite hypocritical when you remember how Osbourne complained about being taunted for her weight. Just last year she said, “I took more hell for being fat than I did for being an absolute raging drug addict… I would rather be called ugly than be called fat!”

This is far from the first time the two divas have bickered. As far back as 2002, Osbourne was trashing Aguilera on her family’s reality show The Osbournes, calling her “one of the most disgusting human beings in the world,” and Aguilera is said to have put Osbourne in a headlock at a party when she heard the girl was trash talking her.

Interestingly, Aguilera later bought the home the Osbournes lived in when they were filming the show. It’s currently on the market for $13.5 million.