Maroon 5, fronted by Adam Levine of course, put on a fantastic show during America’s Got Talent’s results show Wednesday night. We can’t get enough of watching them perform Moves Like Jagger.

Adam Levine and his band Maroon 5 hit the America’s Got Talent stage for an explosive performance we’re sure everyone will be talking about. 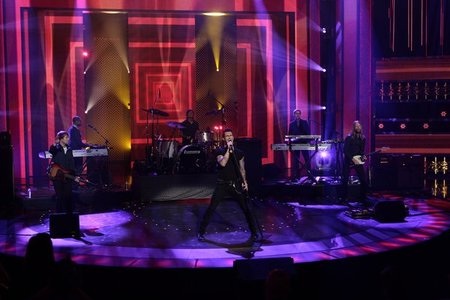 Between impromptu sets with Stevie Nicks, developing a new show with NBC based on a karaoke bar and getting set to return for season two of The Voice, Adam Levine is one hot ticket these days. So, why wouldn’t America’s Got Talent be the next stop for him and Maroon 5?

We could listen to Maroon 5 sing Moves Like Jagger all day. It’s a good thing they decided to wipe the floor with it during America’s Got Talent’s results show.

Adam Levine could stand there with his mic and not even move while singing that song and we’d be totally weak in the knees.

Maroon 5 isn’t the only big-name act that has graced the Talent stage this season. So far, Avril Lavigne, Stevie Nicks and Jason Derulo have all rocked the stage.

With the YouTube round and semifinals upon us, America’s Got Talent is just heating up, so keep coming back to find out the latest news.

Did Maroon 5 kill the America’s Got Talent stage or did their moves not live up to Jagger standards?

read on for more maroon 5 news

Adam Levine teams up with NBC for new sitcom