It’s the hit show that may never see the light of day on MTV, but Bridge and Tunnel is getting more press than the network bargained for, thanks to a cover story in the Village Voice. It reveals the tale of a reality series about young adults from Staten Island who were supposed to be big television stars, but were shelved for a little show called Jersey Shore.

Brianna, Gabriella, Tim, Michelle, Robby, Natalie, Jimmy, and Joe. Those were the names that should have been ingrained in the public lexicon, as the cast of MTV’s Bridge & Tunnel. Instead, we learned lingo like DTF, GTL and landmines from Vinny, Pauly D, The Situation, JWoww, Snooki, Deena, Sammi, and Ronnie. They ended up scoring big with Jersey Shore, and the cast of Bridge and Tunnel was tossed into MTV oblivion. 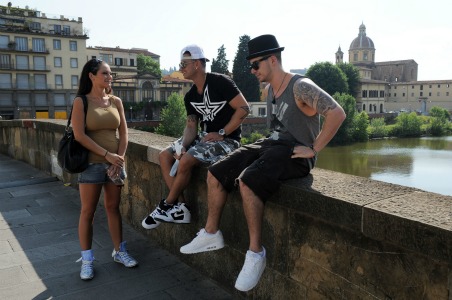 Back in October 2010, celebrity blogger Perez Hilton premiered a clip of an MTV show that looked remarkably like Jersey Shore, except it was called Bridge and Tunnel and starred eight young Staten Islanders, all looking to break free from their hometown. The stars of the show were sisters Brianna and Gabriella DeBartoli, who make Snooki and Deena look like women at a ladies luncheon.

Meet Gabriella, quoted as saying, “I can’t really date Staten Island boys, I’ve dated all of them.” Her younger sister Brianna was seen smoking, cursing and flipping the bird to anyone who dared cross her path in the preview clip.

The DeBartoli girls entered reality television through a VH1 casting call for the series Tool Academy (created by Jersey Shore mastermind SallyAnn Salsano). Brianna’s application was not accepted, but Viacom (parent company of VH1 and MTV) liked what they saw and recruited her to an early version of B&T. As the Village Voice put it, “This was a series about kids with stories, not kids whose only stories were the show.” A writer for the Los Angeles times declared it, “the greatest show you’ve never seen.” Incidentally, VH1 had the original idea for Jersey Shore, and had already hired their first guido, Mike “The Situation” Sorrentino (whose sudden fame has shattered his family), and when the series made its way to MTV, he was the only original cast member brought over.

Jersey Shore: Too fast, too reckless for Italy>>

According to an investigation done by the Village Voice, a rough draft of the show had been in circulation at MTV since 2008, before Jersey Shore made it to the air. Twelve episodes of the series were filmed, but one month before its airdate, MTV pulled the plug. In 2009, Jersey Shore made reality television history and instant stars of Snooki and The Situation.

The rug pulled out from underneath them, the DeBartoli sisters lost their shot at success. They signed an exclusive contract with MTV and are prohibited from speaking about the series for several years. They were reportedly paid $1,500 to $2,000 per episode for the shows they filmed, but that’s nothing compared to the $100K each cast member of Jersey Shore is making today.

So while the show that should have made them superstars sits on the shelf and the Jersey Shore cast pulls in the big bucks, Gabriella and Brianna earn their livings as a pizza-order girl and a secretary, respectively.