In a move right out of a Hitchcock flick, a mysterious new film from the master of suspense has been found in New Zealand. A rescued partial print of Alfred Hitchcock’s 1920s silent film The White Shadow is set to (re)premiere next month.

Alfted Hitchcock went on to obvious acclaim with movies like Rear Window (1954), Vertigo (1958) and Psycho (1960), but his first film, The White Shadow, was not quite a critical hit. With ’20s starlett Betty Compson in the lead, The White Shadow features elements like an evil twin, mysterious disappearances, mistaken identity and the transmigration of souls. While the acting and production were praised,  the material was considered too far out there, with too much going on. 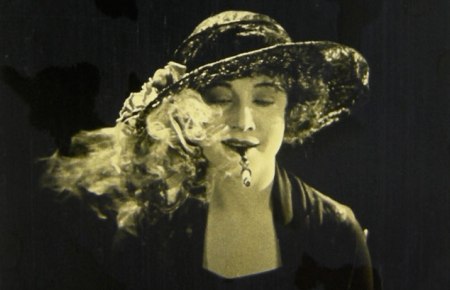 “This is one of the most significant developments in memory for scholars, critics, and admirers of Hitchcock’s extraordinary body of work,” raved David Sterritt, Chairman of the National Society of Film Critics and author of The Films of Alfred Hitchcock. “At just twenty-four years old, Alfred Hitchcock wrote the film’s scenario, designed the sets, edited the footage and served as assistant director to Graham Cutts, whose professional jealousy toward the gifted upstart made the job all the more challenging… These first three reels of The White Shadow — more than half the film — offer a priceless opportunity to study his visual and narrative ideas when they were first taking shape.”

The reels, which had been labeled as Unidentified American film and Twin Sisters, were three of many rescued during a hunt for American films ‘lost’ in the New Zealand Film Archive. They were donated in the ’80s by the family of late movie projectionist and collector Jack Murtagh, along with a host of other highly flamable silent prints.

The White Shadow is already set to re-premiere on September 22 at the Academy of Motion Picture Arts and Sciences’ Samuel Goldwyn Theater in Los Angeles. More dates are sure to follow.