Meredith Vieira reveals in the new issue of Good Housekeeping that she’s happy with her decision to leave NBC’s Today Show. 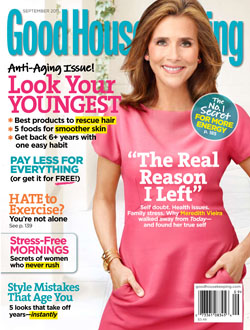 Fans were a bit stunned — and sad — when Today Show host Meredith Vieira abruptly announced that she was leaving the show to spend more time with her family.

Does Vieira regret her decision? Not one bit.

“I knew for a while that I was leaning [toward leaving]; my gut was telling me that it was time to go,” the longtime journalist told Good Housekeeping in their September issue.

Weighing heavily on her decision was her husband’s health — he suffers from MS.

“Family and health factored into my decision, but it’s not like Richard is taking some turn for the worse… I was more leaving because he’s healthy. So why not while we are able to enjoy life?” Vieira asked rhetorically.

“He has secondary-progressive MS; we don’t know what’s going to happen. Every year, it’s a little bit worse. On the other hand, he’s doing great compared to a lot of people. And he’s certainly self-sufficient. I mean, the idea that I’m nursing him is ridiculous.”

That’s great to hear — and even better is the news that their marriage is stronger now than it’s been in a long time.

“There’s a dance to relationships, and we had been doing a little bit of the dancing side by side but not together. Now, we’re back together, and we’ve got to figure out the rhythm of that dance. That kind of reconnecting is really important,” she said.

Luckily, we can still see Vieira on Who Wants to Be a Millionaire? when the new season debuts on September 5.

Do you miss Meredith Vieira on the Today Show?