She’s got the body, and it comes with the brains. The hot-on-small-screen House star Olivia Wilde hits the silver screen this summer with two big movies. We caught up with her long enough to get the scoop on her input in The Change-Up, the R-rated scenes and dating. 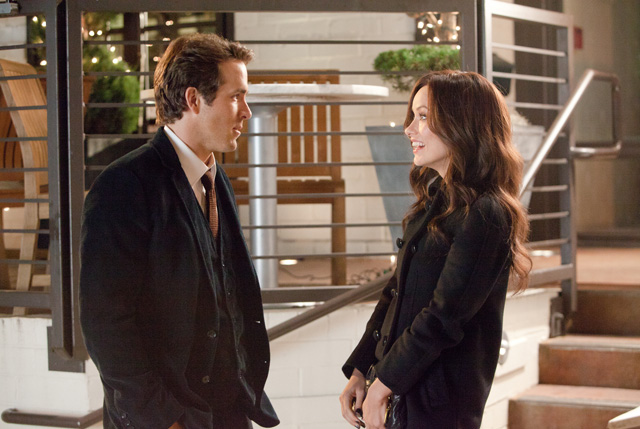 At the end of July, Olivia Wilde went back in time with Daniel Craig and Harrison Ford to the Old West in Cowboys & Aliens. Not bad for the 27-year-old actress who’s been listed on Maxim’s Hot 100 list more times than anyone can count. So, what’s better than playing cowgirl with two rugged superstars? Playing tag team between Ryan Reynolds and Jason Bateman in The Change-Up.

SheKnows: You are everywhere in the next couple of weeks.

Olivia Wilde:  Yeah, you’re gonna be so sick of me. [Laughs]

SheKnows: What’s it like to be in two very big, high-profile films?

Olivia Wilde: It’s really kind of a luxury for an actor to have the opportunity to show such different types of characters. I actually left Cowboys & Aliens and went straight into The Change-Up. It was kind of a funny change of pace. I remember walking about it on the set of Cowboys in this Western town holding the script for The Change-Up and saying to everyone, “What do you think? This is the funniest script I’ve ever read in my entire life. Can I run right into another movie?” And everybody said, “If a script makes you laugh that hard, you can’t miss the opportunity.” It doesn’t happen very often.

PUTTING HER INPUT ON THE PAGE

SheKnows: What kind of woman do you play in The Change-Up?

Olivia Wilde: She is a very smart lawyer, a very responsible professional, at the same time being kind of a wild woman. And, I think that balance is healthy. It’s something that I enjoyed bringing to the screen because I think, too often, our characters are one-dimensional. They don’t really have that balance. And I knew that it would make it funnier.

SheKnows: How did your character change from script to screen?

Olivia Wilde: Well, I love the writing process. It’s something I’m interested in, personally, and something I always do on every movie. Writers get to know me very well. And it always serves me in the end, because I feel I have a deeper understanding of the characters, and sometimes, they really like my ideas and they use them. But I don’t swagger in with a bunch of big structural changes and demand things. I sort of meekly suggest, “What about this? Could we do that?” while understanding the structure of the film and not trying to change that.

SheKnows: Did they incorporate any of your suggestions?

Olivia Wilde: A few major things that I brought to the table actually made it into the movie and that was such a thrill for me. So, I learned a lot and ended up creating a character that I can be proud of.

SheKnows: Has there been a time in your life when you wished you were someone else?

Olivia Wilde: Yeah, of course. I think all of us have had that experience where the grass is greener and you wish you had the other person’s life. The really amazing thing about acting is that I get to experience all different kinds of lives. I’ve been a doctor, a cowgirl and a computer program. I am an incredibly lucky person. So, anytime I start being envious of anyone else’s life, I remember I have it pretty good myself.

SheKnows: People are always coveting the life of a movie star. Are there any drawbacks of that lifestyle?

Olivia Wilde: First of all, I couldn’t describe myself as a movie star. I don’t know when that happens, but it’s certainly not me. [Laughs.] But, I think that you sign a sort of unwritten contract when you become a public figure. When you become an actor, you’re sacrificing a certain amount of privacy, and parts of your life change. But the opportunity to be able to tell stories to a massive audience is really incredible. And this job couldn’t be more satisfying, so any drawbacks, I think, are worth it, if you really enjoy the work.

SheKnows: There’s a long tradition in Hollywood of body switching movies. What makes The Change-Up different?

OLIVIA: It’s just a launching pad for a ridiculous, fun situation. You know, it’s always outrageously terrifying. Have you ever wanted to be someone else? Well, if you actually found yourself in that situation, what could you handle? I loved that I could tell that they weren’t afraid to push the boundaries, and that’s what I’m all about.

HOW TO PLAY THE HARD R-rating

SheKnows: There are some pretty raunchy moments in the film. Were you shocked reading the script?

Olivia Wilde: You know it’s very hard to shock me, and when I read the script, I found myself gasping and shocked and really excited and I also rarely laugh out loud at scripts. I was just howling, it was just well written. And I loved that they were taking this opportunity to take a concept that people understood and blow it out of the water.

SheKnows: Your character goes out on a date with Ryan Reynolds in the film, what was that like?

Olivia Wilde: When she sits down at that date, she’s expecting him to be just another dude who thinks he’s gonna be able to date her because he’s good looking. And, she’s very tough with him. And, she sends back the Chardonnay and asks for a scotch because she just wants a drink after a long day of work. She’s not expecting much from this guy, even if he’s really pretty.

SheKnows: But is she surprised by what she finds?

Olivia Wilde: He opens his mouth, and he’s funny and he’s smart. And, that’s what makes Sabrina fall in love with him. And that certainly is the way it is for many of us women. There are a lot of pretty guys out there, but there are very few who are smart and funny enough for us.

SheKnows: What’s your idea of a good time on a date?

Olivia Wilde: One that ends at dawn. [smiles]

Olivia Wilde: I think creativity, to not be taken to a boring restaurant and boring whatever. For me, it’s some sort of creative idea and one that stays fun. I like to be surprised.

Olivia Wilde: “I got to approve my own nipples!”
Olivia Wilde prefers food over cocaine
Was Olivia Wilde any good in Cowboys & Aliens