With the George Clooney and Elisabetta Canalis split still fresh, it was just a matter of time before America’s favorite bachelor was paired with a new leading lady. Today’s buzz is that Clooney is secretly wrestling with WWE star turned Dancing with the Stars contestant Stacy Keibler, but the hook up is nothing serious.

In a case of unnamed sourcery, Life & Style is reporting that George Clooney is secretly bedding 31-year-old Stacy Keibler. The long time acquaintances aren’t romancing each other, necessarily. Instead, they seem to have become friends with benefits. 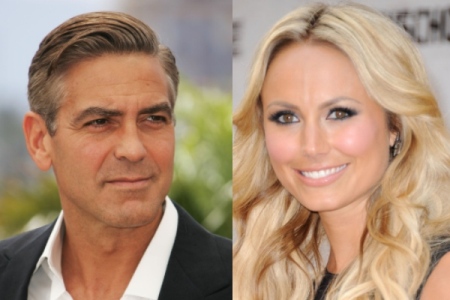 “He’s enjoying spending time with Stacy, but he just got out of a two-year relationship,” an unnamed source told the mag. “George isn’t ready for anything serious. This fling is purely for fun.”

It’s hard to imagine a woman expecting anything but that from Clooney, who’s known for escorting hot young things while showing no interest in getting married!

The mag also reveals that Kiebler just returned from hanging out at Clooney’s bachelor haven in Lake Como, Italy. Keibler was in fact abroad, tweeting from several points in Italy, as well as Beirut, London, Cannes and St. Tropez — but no word of hanging in Como, let alone being flown out there by Clooney.

There are also several tweets revealing the 31-year-old is on top of the world and “in heaven,” but nothing to confirm or deny the Clooney rumor that has now gone viral.

There may be a reason Keibler hasn’t responded:  She doesn’t care. “‘What other people think of me is none of my business.’ ~ Wayne Dyer,” she tweeted.