Brace yourselves: Not everything is absolutely perfect in the world of Gwyneth Paltrow. The actress heavily hints at marriage problems in a new interview with Elle magazine. 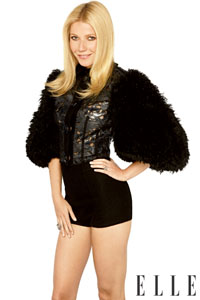 Everything in Gwyneth Paltrow’s life is absolutely perfect, right? Perfect thighs and abs, the perfect career, a perfect garden full of salvia, a perfect family, all documented in her perfect blog GOOP.

Except that it isn’t all perfect — particularly her marriage.

Paltrow usually maintains absolute silence on her union with Coldplay frontman Chris Martin, but in an interview with ELLE she hints that not all is well with this match.

“Sometimes it’s hard being with someone for a long time,” Paltrow says in the September issue of ELLE, out Aug. 16. “We go through periods that aren’t all rosy. I always say, life is long and you never know what’s going to happen.”

Hmmm, sounds a lot like the interview Jennifer Lopez gave to Vanity Fair just before she announced her split from Marc Anthony.

“If, God forbid, we were ever not to be together, I respect him so much as the father of my children,” the Oscar winner continued. “Like, I made such a good choice. He’s such a good dad. You can never be relaxed or smug and think, ‘I’ve got this thing.’ That’s also part of it — keeping yourself on your toes. I’m not going to take this for granted.”

Paltrow has plenty to keep her busy if the worst does happen: the Oscar-winning actress has several opportunities for parlaying her singing success in the movie Country Strong into a musical career. That would be great revenge on a Grammy-winning ex.

Gwyneth Paltrow has a Glee-ful time in London

Gwyneth Paltrow’s GOOP takes on homosexuality in the Bible