Leslie Mann, who plays wife to Jason Bateman (and at times Ryan Reynolds inside Jason Bateman — try to keep that straight) in the new R-rated body-switching movie, The Change-Up, sat down with SheKnows to talk about baring her chest, seeing Jason Bateman naked and kissing the sexiest man alive. 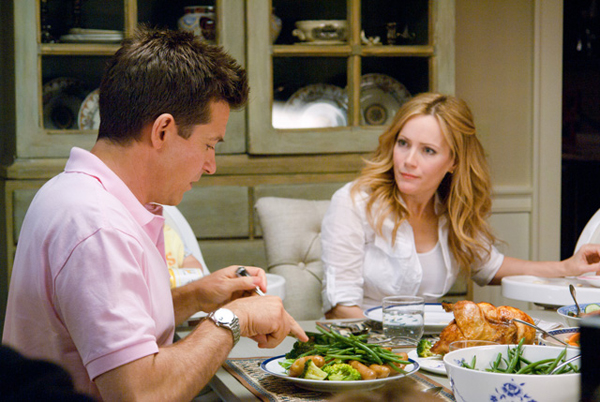 SheKnows: After appearing in 17 Again, and now The Change-Up, do you feel at home in the body-switching comedies?

SheKnows: What’s it like playing a character who goes to bed one night with one husband and wakes up the next day with a totally different person?

Leslie Mann: I guess in real life that would be fun, huh? [Laughs.] But, I don’t think my character liked it. But the boys did such a good job of switching and playing the other one, so that made it lot easier. But it did get confusing at times, because you don’t shoot in sequence. It was kind of hard to follow at times.

SheKnows: If you could switch bodies in real life, who would you switch with?

Leslie Mann: Ryan Gosling‘s girlfriend. Or, anyone who is really close with Ryan Gosling. [Laughs]

ON WORKING WITH THE BABIES

SheKnows: How did you handle the scenes with the babies?

Leslie Mann: It’s hard to hold twins. And they are big, chubby, healthy babies, and they’re heavy. And so, the boys walk in and walk down the stairs and hand them off to Jason, who is now Ryan, and Jason was saying he had a good hold on them, but they were almost dangling off… Didn’t it look dangerous? And he seemed like he had control over the situation, but it didn’t look like it. And it made me really nervous.

SheKnows: What did you think when you saw the breastfeeding scene in the script?

Leslie Mann: I think it’s really funny. First of all, they brought in, like, eight different babies, trying to get them to go for it. [Laughs.] And they kept rejecting me, because they would, because I’m not their mother and they know. And, it felt bad. You know how they say, if you breastfeed your baby, some mothers get rejected by their baby and feel weird about it. It felt weird. And in front of everyone watching, it was weird. [Laughs]

SheKnows: Do you think it’s interesting that one character is disgusted by it and the other accepts it?

Leslie Mann: Well, one is like a man-child, and one is a man. I used to walk around the house, feeding my baby, answering the door, and I didn’t think anything of it, but certain people could have weird reactions to that. But I think you just get used to stuff like that. If you’re not used to seeing it, it is weird. [Laughs] I have no problem with it at all. It’s perfectly natural.

SECRETS TO A LASTING MARRIAGE

SheKnows: Part of the film focuses on a couple having problems with communication. In regards to your husband, Judd Apatow, what advice can you give on having a lasting marriage?

Leslie Mann: There are good days, and there are bad days. I don’t have any secrets, I don’t think… Do I? [Laughs.]

SheKnows: Not one nugget of advice after 16 years?

Leslie Mann: I guess I have been married for a while. We really like each other, and we are friends, and we think each other are funny. And we agree on how to raise our children, and what else do we do…? I don’t know. We fight a lot. [Laughs] Am I mad at him right now? I don’t know. [Laughs.]

SheKnows: What’s it like to see Jason Bateman naked?

Leslie Mann: The first time we shot that [scene], he had a robe on. And then a couple of weeks later, he watched what we shot and he decided it would be funnier if he didn’t have a robe on and he was completely naked.

SheKnows: How much did you see…?

Leslie Mann: I got to see everything. He didn’t seem to care. He seemed really comfortable. But, yeah, it was all right there.

SheKnows: Was it hard to keep a straight face?

SheKnows: What was it like working with Ryan Reynolds?

Leslie Mann: It was great, and that week I kissed Ryan, was the week that he was on the cover of People Magazine as the Sexiest Man Alive, so it was great. I loved it. My mom’s friends loved it.

SheKnows: Is he a good kisser?

Leslie Mann: He’s a great kisser, but he has a sharp beard. It was really hard. [Laughs.]