Outspoken British singer Morrissey has put his foot in his mouth once again, claiming that killing animals for fast food restaurants is worse than the recent Norway massacre. He shocked concertgoers in Warsaw, Poland, with his outrageous statements and prompted some fans to walk out.

Related story Morrissey is surprisingly nonchalant about having cancer 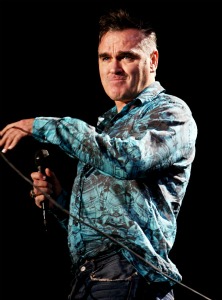 The longtime Smiths frontman and vegetarian spoke his mind at a recent concert in Warsaw, Poland, where he treated fans to much more than his greatest hits. He also lost their respect.

Morrissey is refusing to retract several comments he made at this particular show. Prior to singing his smash hit, “Meat is Murder,” he said that the recent massacre in Norway by Anders Behring Breivik was “nothing” compared to slaughtering animals for fast food restaurants. The massacre left 76 people dead.

While the singer has always been political, this time, he took things a little too far. A vegetarian (and making it fashionable) since the age of 11, he said, “We all live in a murderous world, as the events in Norway have shown. Though that is nothing compared to what happens in McDonald’s and Kentucky Fried S**t every day.”

Fans reacted angrily to his outbursts, and shared their views online. One fan, Louis Bebb, stated, “I’m a huge Morrissey fan, never loved any musician more than him, but this is a sickening comment to make, definitely the worst thing I’ve heard him say over the years. Sort it out Morrissey.”

Since his outburst, the singer released a statement saying, “The comment I made onstage at Warsaw could be further explained this way: Millions of beings are routinely murdered every single day in order to fund profits for McDonalds and KFCruelty, but because these murders are protected by laws, we are asked to feel indifferent about the killings and to not even dare question them. If you quite rightly feel horrified at the Norway killings, then it surely naturally follows that you feel horror at the murder of ANY innocent being. You cannot ignore animal suffering simply because animals ‘are not us.'”

He continued, “The recent killings in Norway were horrific. As usual in such cases, the media gives the killer exactly what he wants, worldwide fame. We aren’t told the names of the people who were killed, almost as if they are not considered to be important enough. Yet the media frenzy to turn the killer into a Jack the Ripper star is repulsive. He should be un-named, not photographed, and quietly led away.”

The singer has previously made public comments on Margaret Thatcher, George W. Bush and David Cameron. He has also been accused of racism.