Sarah Jessica Parker sat down with Marie Claire to talk about the trappings of fame — and the actress says she never wanted to be in the spotlight. 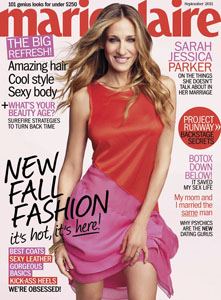 Sex and the City actress Sarah Jessica Parker has been in the biz since she was a kid — she first appeared on Broadway at the tender age of 11 — but the star says her goal was never to be famous.

In the September issue of Marie Claire, Parker explains that she just wanted to be an actress — not a household name — and that she strives to live a life as opposite from the typical LA celebutante as possible.

“And in my daily life, I work really hard to not trade on it in any way. I am so desperately worried about anybody saying, ‘She cut in line’ or ‘She took our table’ or She got out of jury duty’ or ‘She doesn’t do her own grocery shopping.’ The things that bother me are counter to who I am and the way I live. It’s not like it’s hard to be decent and respectful and well-behaved. I do wait in line, and I do take the subway, and I do do my own grocery shopping, and I do take the kids to school.”

Parker said earlier this summer that she will stay in New York City forever — place where celebrities often flock because they are left alone.

How about that Page Six story that Parker tried to pull the celebrity card to get out of jury duty? Total bunk, she says.

“For Page Six to be so cavalier — I was so outraged by the character assassination!” she said. “I have served so many times, I was asked to come speak at Jury Appreciation Day! I expect I should be more calloused by now, but I am so sensitive about not ever living up to anybody’s worst idea about an actor who is well-known.”

Catch the actress in the new film I Don’t Know How She Does It due this fall. Check out the entire interview with Sarah Jessica Parker when the September issue of Marie Claire hits newsstands Aug. 16.