Ryan Reynolds and Jason Bateman talk to SheKnows about awkward sex scenes, spankings and Olivia Wilde’s filthy mouth. Oh, and that hilarious new movie their starring in, The Change-Up. 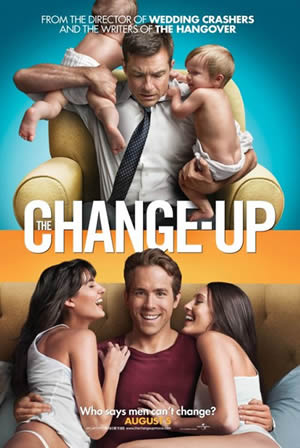 It’s the moment you’ve been waiting for, ladies. Not one, but two adorable guys in the same movie. The Sexiest Man Alive meets the Man of Summer 2011.

Ryan Reynolds and Jason Bateman team up in The Change-Up, a movie about a single guy and a married man who accidently swap bodies. (Isn’t that always the way?) But hilarity ensues, and it’s best kind, in this R-rated raunch com starring two actors who both have the comedic chops to take it to the limit. SheKnows sat down with The Change-Up “boys,” as they are referred to by their female co-stars Leslie Mann and Olivia Wilde, to get the skinny on getting naked, dropping the F-bomb and swapping more than just bodies.

WHAT IF THEY HAD TO… SWITCH BODIES?

SheKnows: Would you really want to switch bodies for a day?

Ryan Reynolds: I’d do terrible things to his body.

Jason Bateman: And to my wife. He’s been after my wife for years.

SheKnows: How did you do it, by studying each other intensely?

Ryan Reynolds: A little bit. I first met Jason, uh, god, fifteen years ago now, so we’ve known each other a long time, but I think I can speak for both of us, quite unilaterally, neither of us is good enough at our jobs to do an impression of each other.

Jason Bateman: How dare you?

Ryan Reynolds: So, no we didn’t really work on that specifically. We just really kind of went with the essence of the other guy.

Jason Bateman: You’re not going to R-rated comedies to get a real study in acting. You want to go in there, have a good time, laugh your ass off, maybe get offended a couple of times and then get the hell out. We’re not trying to win Oscars here or teach anybody any lessons.

NEXT: Ryan likes a good spanking…