Jason Bateman shows all – well practically — in the new R-rated raunch com, The Change-Up, which also stars Ryan Reynolds, who may or may not also flash a bum at some point during the film. Finally! The nerdy cute guy gets the headline. I say this, because if you’re like me and you think Ryan Reynolds is gorgeous, but you have a secret crush on Jason Bateman, it’s time to get your fix for both of these loveable gentlemen all in one movie. 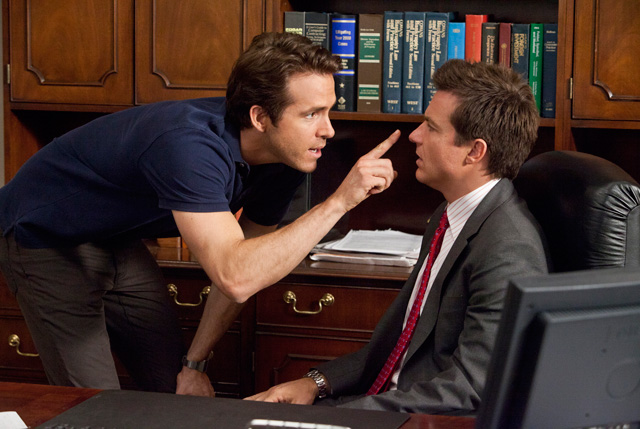 Jason Bateman and Ryan Reynolds – who have been friends for 15 years — co-star in the new comedy, The Change-Up about an irresponsible bachelor (Ryan Reynolds) and a successful family man (Jason Bateman) who after hanging out and getting drunk together one night, switch bodies unintentionally. Isn’t that always the way? Cut to: Breastfeeding for one and hook-up boobies for the other.

When things get complicated — which they often do in body switch movies – the two friends must play out each other’s lives to the best of their abilities, often in tense and hilarious situations.

Once the switching occurs, the movie takes off, wackiness ensues and the comedy slams the audience like a mack truck. Bateman – playing Reynolds — masters the art of the disgusting comeback, walks around naked and hits on anything with legs. The things that come out of his mouth could knock out a sailor. But somehow, rather than being offensive, his trashy irreverence are oddly refreshing.

Audiences have loved the depressed, neurotic characters Bateman has delivered in Arrested Development, Horrible Bosses and Up in the Air, to name a few. But here, he plays a loveable dumb guy, and it’s downright delightful. Finally, someone is having fun with Bateman’s amazing comedic timing and impeccable body – two ingredients to make him the leading man audiences will flock to see. According to co-star Leslie Mann, who plays Bateman’s on screen wife in the film, the nudity was his idea. Perhaps he should take the horns more often in terms of story development. 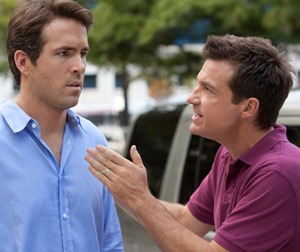 Audiences love Reynolds for his biting sarcasm and cocky bravado, but you won’t find as much of that here as expected. Rather than hitting every line with the punch that makes him Ryan, he spends most of the film treading water while Bateman’s antics steal the scene.

Directed by David Dobkin, (Wedding Crashers, Fred Claus, Shanghai Knights), the film has energy, never takes itself too seriously and pushes the boundaries of R comedy into the stratosphere. That said, there are touching moments, and even a little bit — if not — a lot of heart, particularly in the scenes with Leslie Mann. She is a force to be reckoned with for the modern American mom. She breastfeeds, drops the f-bomb and cries on a dime. She’s perfect! Go Leslie. Audiences will be seeing more of her soon. She’s currently filming an untitled spin off to her role in Knocked Up about her funny yet somewhat dysfunctional marriage with co-star Paul Rudd. A leading role has been long awaited since we saw her get drunk and almost crash her PT Cruiser with Steve Carell in The 40-Year-Old Virgin.

Another wonderful addition to the film is the gorgeous actress Olivia Wilde. She plays the sexy co-worker who is funny, quick witted and intimidating all at the same time. She gets Bateman and Reynolds into trouble throughout the film with her big ideas and even bigger eyes. It’s been a good year for Wilde. She also starred in another summer blockbuster, Cowboys & Aliens, and continues to create buzz with her staring role in TV drama House.

The Change-Up is gross, it’s funny, it’s heartwarming and there’s lots of nudity, for the men and the woman. You can’t go wrong to drag your mate to this film, just make sure it’s not your mom. Unless of course she likes hot men… On second thought, bring her, too.

More on the Change-up

Jason Bateman is naked, Ryan Reynolds is hot in The Change-Up

Leslie Mann: I had to breastfeed someone else’s babies!