Casey Anthony must return to Florida to report to the probation office, though her attorney disputed the ruling.

Just hours after Casey Anthony’s attorney appeared on Today to dispute the validity of a judge’s order mandating that she return to Orlando for probation issues, the Florida Department of Corrections has put their foot down: Anthony must return to Orlando. 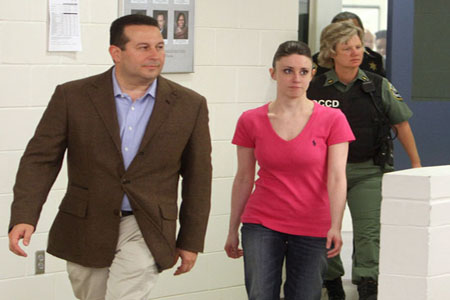 Anthony was convicted of check fraud charges while she was in jail awaiting her murder trial and given one year probation. While Anthony’s legal team was under the impression she completed her probation during her jail time, last week the judge said he meant for her to complete it afterwards.

The judge ordered Casey to return immediately, but her legal team filed an emergency injunction Tuesday to block it.

A Florida Department of Corrections spokesperson said Anthony must report to their office by 10 a.m. Thursday and be prepared to provide a permanent address, which will be part of the public record.

Here’s the problem: Anthony’s lawyer says her safety is at risk because she has received death threats after her acquittal on murder charges in the death of her daughter, Caylee.

“We are prepared to begin supervising Casey Anthony on probation,” said the Corrections spokesperson, Gretl Plessinger. “She has not yet reported for probation and we do not yet have a time when she’s going to report for probation. But we are still in contact with her attorneys and they have been very cooperative.

“We’re going to be treating her just as any other offender.”

Anthony is thought to be in Ohio after photos surfaced of her shopping there over the weekend.

Hustler has $500K for Casey Anthony