Now that Ashley Hebert has given her final rose to J.P. and taken him off into the sunset, the world awaits to see if their relationship will make it through the daylight. In the meantime, previous Bachelorette Ali Fedotowsky is still going strong with her fiance Roberto who proposed to her in Fiji last year. SheKnows sat down with Bachelorette Ali to see how she and Roberto kept the momentum going as their dating life pressed on long after the ABC cameras stopped rolling. 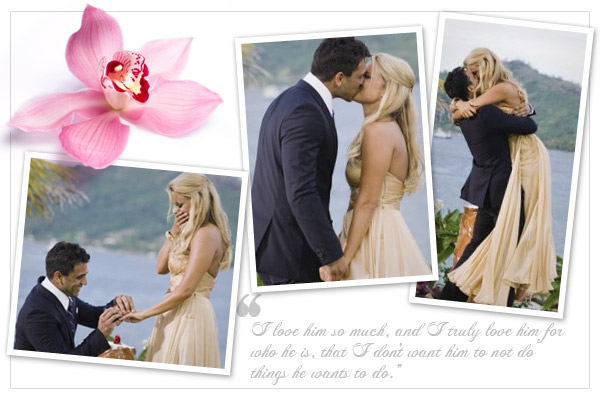 Despite falling in love on national television and traveling around the world to make it happen, Ali and Roberto are no exception for what it takes to make a relationship work. Their love story is surely unique, but they have faced the same challenges that any couple would face as they continue to grow together. Here are a few words of advice from Ali.

Let him make his own decisions

Ali admits that before Roberto she was prone to being a little controlling in her relationships. With Roberto, she says, “I love him so much, and I truly love him for who he is, that I don’t want him to not do things he wants to do.”

While she does want him to be happy, she also doesn’t want to be hurt by anything he does. So she’s learned to not respond to that fear with the 20 questions of, “Who’s going? You’d better leave if your friend brings a bunch of girls home at three in the morning.” This immediatly puts your guy on the defensive.

Don’t stop learning about each other

“I am definitely learning more about his culture,” says Ali. “He’s super, super close with his family and I sort of knew that before, but I didn’t know the extent. I continued to learn that through seeing him interact with them.”

By continuing to spend time together, as well as with his family, she has learned more about the role of faith in his life. She also recalls how happy he was when his brother came to visit and it’s things like that that keep binding them as a couple.

Ali and Roberto have had to postpone their big day because of Ali’s knee injury. “It’s heartbreaking, and it’s really sad, but guess what? I’m with him every day, I live with him, we share our lives together. In my mind, we are married. I don’t need a piece of paper to tell me that right now.”

Per Ali’s advice, if you’re dating someone you see a future with, just focus on being together. If you’re in a hurry to get married, you’re probably missing out on the simple pleasures of being a couple. Just sit back and smell the flowers. You may not be in Fiji, but love will continue to blossom with or without a formal “I do.”

Brush up on the season that brought Ali and Roberto together, and read about highlights from the most recent season of The Bachlorette with Ashely and J.P. on Reality Tv Magazine >>

Bachelorette Ali Fedotowsky tells us why she’s postponing her wedding
The Bachelorette’s Ben F. opens up on After the Final Rose
Bachelorette Ashley’s 10 best looks