Blake Lively has been spotted all around the world with her new boyfriend, Leonardo DiCaprio. Their latest date involved a third wheel. 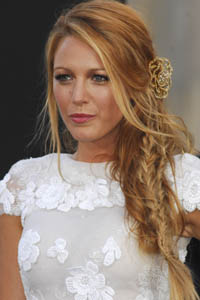 Leonardo DiCaprio and Blake Lively can’t keep away from each other, and their latest date found the two famous lovebirds biking around New York City.

Lively and DiCaprio are dating, and were most recently seen riding bikes in Manhattan, according to PopSugar. But they were not alone. Tagging along was DiCaprio’s longtime best friend and fellow actor Lukas Haas, star of Witness and Inception.

Of course, these celebrities weren’t riding just any bikes. They were riding electric, Swiss-made Stromer bicycles that retail for almost $3,000 each. Lively wore a brown dress with a black hat and DiCaprio donned sunglasses in an attempt to not get noticed, but the paparazzi quickly identified the stars and trailed them as they cycled through the city.

Lively is in New York City to shoot Gossip Girl, and DiCaprio was free to follow his new girlfriend there while he is on a break from shooting The Great Gatsby. Previously, the two had spent time together at Cannes and in Los Angeles, where Lively was shooting an upcoming movie, Savages, directed by Oliver Stone.

Apparently, the couple was able to weather the storm of what looked like nude photos of Blake Lively, and when Blake met Leo’s mom, which didn’t go so well.

Blake Lively and Leonardo DiCaprio are back on!