Vanessa Minnillo expressed sadness that her mother wasn’t at her wedding — but mommy dearest says she wasn’t aware of her daughter’s nuptials. 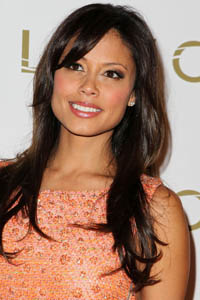 Vanessa Minnillo and Nick Lachey were married recently, but while Minnillo and Lachey’s wedding was on TV, not everyone in their families was invited to the ceremony.

Among those excluded: Minnillo’s mother. Now, Helen Bondoc is speaking up about not receiving an invitation to her own daughter’s nuptials.

As it turns out, Bondoc not only wasn’t invited; she didn’t even know that her daughter was set to walk down the aisle with Lachey.

“I didn’t have a clue that Vanessa was getting married,” Bondoc says. “We last spoke about 12 years ago, on the phone. I just wanted to talk to her and tell her everything straight about my life. But I still think about her all the time, and I still love her dearly.”

Why are Minnillo and her mother estranged? While Minnillo bounced around between homes as her mother moved and remarried repeatedly, eventually Bondoc showed up with Minnillo at her father’s house and left her there when she was nine.

“[Helen] said, ‘Keep them for now,'” Minnillo’s father says. “But she never came back.”

“Our relationship wasn’t that sexual,” Bondoc says. “I think we both just wanted to be with somebody.”

That’s why Vanessa and Nick had a private wedding ceremony.

MORE ON NICK AND VANESSA

Why is Nick Lachey preparing for a wipeout with new wife Vanessa Minnillo?

Nick Lachey gets all mushy about bride Vanessa Minnillo