Mila Kunis brings more to the Friends with Benefits table than an open mind to sexual relationships. Lucky for co-star Justin Timeberlake, Mila Kunis has a quick Russian tongue!

Mila Kunis is one great friend to have, should you ever find yourself struggling through a press conference in Russia. In a new video (watch below!) the Friends with Benefits hottie jumps in to help Justin Timberlake — who’s uncomfortable squirming is priceless! 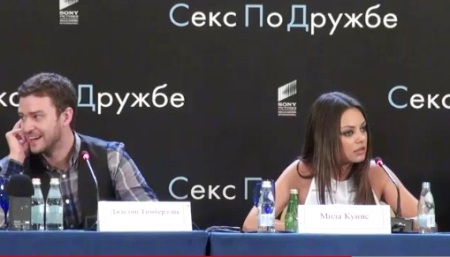 Mila Kunis and Justin Timberlake’s Russian press conference got a little heated (and hilarious) when a reporter asked Justin why he’s focusing on movies now instead of music. Apparently not a fan of the line of inquiry, Mila — who was born and raised for seven years in the Ukraine — jumped in before J.T. even had a chance to understand what was happening.

“Why movies? Why not?” Mila Kunis responded in Russian. “What kind of question is that? Why are you here?”

Even better than watching Mila Kunis jump into action in her native language? Watching Justin Timberlake squirm in confusion! Brother is holding onto that ear piece hoping for a solid, timely translation like it’s his only lifeline.

Watch the video of Mila Kunis and Justin Timberlake in Russia here: