We’ve finally reached the end of the top 48 acts on America’s Got Talent and the last 12 were a mix of guilty pleasures and thrill-seekers. Read on to find out who our favorites are.

The last of the top 48 took the America’s Got Talent stage Tuesday night, which means this will be the last time we highlight the acts before the semifinals hit. 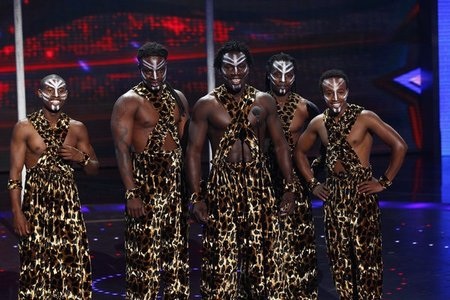 Out of the 12 acts to the hit the stage, we were highly impressed by five this week. We’re not sure what’s going on in the last two weeks, but some of the acts have really been falling short.

The first act we were on our feet for this week was Zuma Zuma. These guys blend danger, acrobatics and adrenaline to give fans a complete Vegas-style show. Watch them climb poles — and each other — for a flipping good time!

We’re not putting Sam B. in here because he’s the best dancer. We’re including him because he’s just so darn awesome. He’s contagious and makes us want to do a hyped-up version of the sprinkler.

Yellow Designs Stunt Team put on some crazy costumes, hopped on their bikes and gave us a thrill. The team, who we liken to BMX pros on acid, proved that they’re one of the acts that has more to lose — one of their guys actually fell, but they kept going. Check them out…

Remember Fighting Gravity? The America’s Got Talent contestants that used black lights and technology to put on a $1 million-worthy act? Well, they have a run for their money when it comes to Team iLuminate. They use wirelessly lit costumes and explosive dance art to entice the viewers. You have to see it to believe it.

Who was your favorite America’s Got Talent act this week? Don’t forget to come back Wednesday night (Aug. 3) to find out if our picks made the semifinals.