Linda Evangelista is asking for big bucks from the husband of Salma Hayek in what is shaping up to be an expensive paternity case. 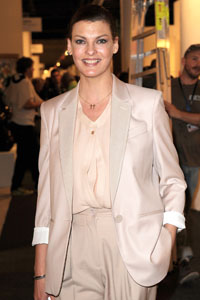 Francois-Henri Pinault had a dirty little secret when he and Salma Hayek were dating: supermodel Linda Evangelista was pregnant with his love child. Hayek forgave and forgot, but there’s still the issue of Evangelista’s son — and a lot of money.

Evangelista is asking for a whopping $46,000 a month in child support to care for four-year-old Augustin, claiming that since she is a working single mom the tot needs round-the-clock nannies, armed chauffeurs and his own security staff.

“That would probably be the largest support order in the history of the Family Court,” said Support Magistrate Matthew Troy.

Not that Pinault can’t afford it — he is the CEO of the parent company that owns such luxury brands as Gucci, Yves Saint Lauren and Balenciaga, and his family is worth a reported $11.5 billion.

Still, he is fighting the payout, a move Evangelista’s lawyer says is ridiculous considering how much cash he lavishes on three-year-old Valentina, his daughter with Salma Hayek.

Of course, Pinault could look at it another way, like he’s getting a deal. After all, $46,000 is less than the $55,000 a month Charlie Sheen lays out in child support to both Denise Richards and Brooke Mueller every month, not including alimony.