What can we make of Samantha Ronson’s mugshot smirk? Hard to imagine what’s so funny about being arrested mid-morning on DUI charges. 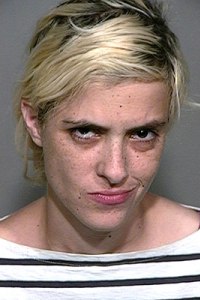 Samantha Ronson’s smirking mugshot is worth so much more than 1,000 words. The official mugshot photo of the DJ has been released while so-called friends of hers have opened up about how not surprised they are by her mid-morning DUI arrest.

In response to news of Samantha Ronson’s DUI arrest Monday morning, friends tell TMZ the DJ has “not been acting like herself” in recent months.

A source reveals an increase in late-night partying including heavy boozing has gone way beyond Samantha Ronson‘s duties as a DJ. Things had gotten so bad even ex-girlfriend Lindsay Lohan — notorious for her own partying troubles — had began to worry.

Word has it that because Samantha Ronson’s behavior had become increasingly out of control, Lindsay Lohan had “decided to minimize her contact with the DJ because she felt Sam wouldn’t be a positive influence.”

Ouch! You know things are rough when even Lindsay Lohan thinks you’re a bad influence.

What we want to know is why were Samantha Ronson’s so-called friends simply watching her spiral down — and then readily opening up to the tabloids at the first sign of trouble?

Sounds like both Lindsay Lohan and Samantha Ronson need to re-evaluate who the keep close!