Rod Stewart is proud to be the father of eight — even if he can’t quite recall all of his kids’ names. 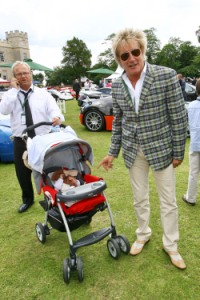 Rod Stewart’s got a lot on his mind. The 66-year-old rocker has eight kids’ names to keep straight — and still isn’t quite clear on how he became such a hit with the ladies. The rocker sat down with Australia’s 60 Minutes show recently to try and figure things out.

The father of eight, whose youngest child is five-month-old son Aiden, is struggling a bit with his dad duties.

“I’m very proud of my kids,” said Rod Stewart. “The funny thing is with the little one — so many of them I can’t remember their names now — um, Alistair. When I’m around Als I’m ‘dad’ but when I’m on tour, if I’m away for a couple of nights, he calls me Rod Stewart.”

Rod Stewart is happy to help out with baby Aiden during daytime hours, but admits he doesn’t have the energy to take on night-time feedings. Rod Stewart shared, “As long as it’s during the day I’m OK, I can’t seem to do the night things anymore.”

Asked for the secret to his love life success, which includes relationships with beauties such as Alana Hamilton, Britt Ekland and current wife Penny Lancaster, Rod Stewart said: “I’m embarrassed, I don’t know, I mean I’m not a standardly good-looking bloke, I don’t know what it is. I mean, I’m not Brad Pitt am I?

“I used to do alright even before I was in the music business, you know, probably a good chat-up line and I think I can be fairly charming and well-mannered when I want to,” Rod Stewart shared.