Is Caleb Followill headed for rehab? Sources say his bandmates are trying to get him to go.

Kings of Leon stunned fans this weekend when lead singer Caleb Followill complained about the Texas heat and left the stage. 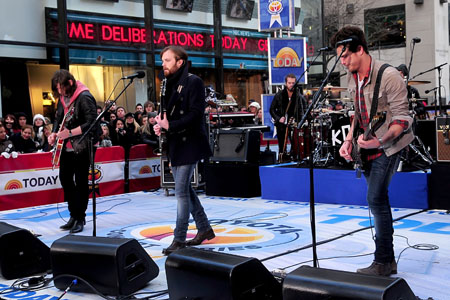 Except he never came back — and his bandmates were left to apologize to the ticked-off audience.

KOL tried to explain the weird incident on Twitter.

“There are internal sicknesses & problems that have needed to be addressed,” Jared wrote Saturday afternoon. “I know you guys aren’t stupid. I can’t lie. There are problems in our band bigger than not drinking enough Gatorade.”

Then, the band announced on Monday that they’re scrapping the whole U.S. tour.

“The reason for the cancellation of the tour is Caleb is under doctor’s orders for vocal rest,” the band’s rep said in a statement. “They feel terrible about canceling. They look forward to getting back on the road at the end of September.”

However, sources close to the band are blaming Caleb’s drinking problem for his erratic behavior.

“They are trying to get Caleb to go to rehab. It is mostly for alcohol,” a source told US Weekly. “[That’s why] they ended up canceling the whole tour… he drinks like a fish.”

Another source agreed. “It’s true. Caleb’s drinking is out of control and they are trying to get him into rehab. It’s a dark demon he has been fighting for a while.”

Is it true? If it is, we’ll expect to hear a rehab announcement in the not-too-distant future. One source doesn’t think that’ll happen, though.

“They all drink, all the [bandmates]. Anyone in a band usually likes to have a few beers on the road… they have never discussed [Caleb’s drinking] as a problem before.”

Do you think Kings of Leon is headed for Rehabville?