Miley Cyrus has gone from Disney’s Hannah Montana to Hollywood juggernaut. And now, the singer-actress is ready to take the next big step in her career — as a producer! 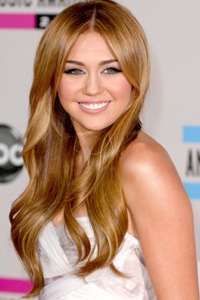 Miley Cyrus has joined forces with Paramount Pictures to star and produce a new, God-themed comedy. The movie is a joint venture between the actress, her mom Tish Cyrus and their production company Hope Town Entertainment. This sounds like a classic example of ‘a family that works together, stays together.’

The plot for the film has been kept under lock and key but it supposedly involves “a broken promise with God.” What does that mean exactly? The tagline is pretty vague and leaves the door open for endless possibilities. Perhaps it’s a teen comedy that has to do with a young woman breaking a vow of celibacy?

Whatever the story, Cyrus’ producing credit will give her some serious clout on the film set. The last movie she headlined was the 2010 adaptation of Nicholas Sparks’ The Last Song. And next she’ll appear in the upcoming projects, LOL and So Undercover.

What do you think of Miley’s new role behind the scenes?