A former Betty Ford Center worker is suing Lindsay Lohan over an altercation that happened while the star was in rehab. 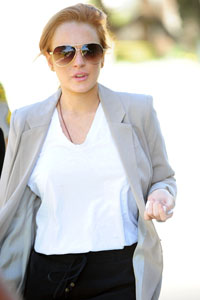 Dawn Bradley is suing Lindsay Lohan for pain and suffering over an injury that resulted from an argument at the Betty Ford Center while the star was in rehab last summer. Now the ex-counselor is speaking out in a damage control effort to save her name.

Bradley’s lawyer Owen McIntosh told KABC-TV in Los Angeles, “I don’t like the blogs that I’ve seen out there discussing how she’s just trying to make something out of nothing, trying to capitalize on Lindsay Lohan’s star power and take a bunch of money from her.”

“Does it have anything to do with money? No. I’m hoping to God that it’s a wake-up call for Lindsay,” Dawn Bradley said. “I want the best for her. I want her to get this. I want her to be clean and sober.”

So what happened on that fateful night? Bradley’s story has changed since then — she never mentioned Lohan injuring her wrist in her initial police report — but Bradley says the actress was drunk and twisted her left wrist hard in an attempt to get the phone away from her. As a result, Bradley says, she now suffers from de Quevain’s syndrome, an inflammatory condition affecting the tendon connected to her thumb.

“Lindsay Lohan is a human being, what her background is as being in the movies and all that stuff, still doesn’t take away the fact that she’s a human being and she has to be responsible for her actions,” Bradley said.

Lindsay Lohan was never brought up on any formal charges in the case. Bradley was fired from the Betty Ford Center immediately after the incident for breaking patient privacy laws by going to the press with the story.