Paris Hilton is a one-woman marketing machine; just ask the boys of LMFAO, who credit the socialite with their rocket to fame.

LMFAO’s Redfoo and Skyblu are giving thanks for Paris Hilton. The party rock pair credited the socialite for helping expose their music to the world in an unusual way. 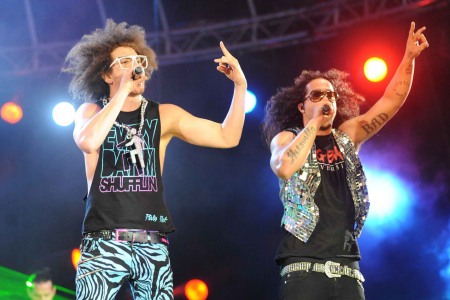 The boys of LMFAO say it was Paris Hilton‘s penchant for rocking out to their songs while being followed by paparazzi that helped them break into the public’s consciousness. Redfoo (real name Stefan Kendal Gordy) and Skyblu (Skyler Husten Gordy) spoke to Entertainment Weekly about Paris’ unintentional marketing of their group.

“Paris Hilton is a big fan. She’s actually a big reason we’re here today, because she would play our music in front of [cameras for gossip website] TMZ when she would drive around,” Redfoo said.

In response to hearing of LMFAO crediting her part in their journey Paris Hilton tweeted on Monday, “Thanks for the shout out! Love you @LMFAO!”

Other famous faces jumping on the LMFAO bandwagon include Jamie Foxx and Debbie Harry, much to the amazement of the rapping pair. “Debbie Harry said that she made her [upcoming] album based on LMFAO,” Redfoo said, adding, “Jamie Foxx [starred in] one of our videos.”

Behold the marketing power of Paris Hilton and the paparazzi!