Charlie Sheen will never, ever, ever be coming back to Two and a Half Men — and Chuck Lorre is making sure of that by killing and burying his character. 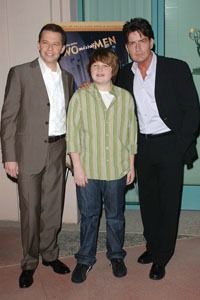 Charlie Sheen will be killed off and his character’s funeral will be the centerpiece of the first two episodes of this season’s Two and a Half Men, according to reports.

While it is still unclear what exactly causes Charlie’s untimely demise, the episodes will focus on his funeral and the sale of his Malibu beach house.

Charlie’s funeral will be attended by lots of his ex-girlfriends, and we can expect to see a parade of celebrities come by to check out the house, including stars of producer/co-founder Chuck Lorre’s other series, which currently include The Big Bang Theory and Mike & Molly.

Ashton Kutcher, who is taking over the lead from Sheen, is expected to be the guy who buys the house and allows the characters played by Jon Cryer and Angus T. Jones to remain living there.

The season premiere of Two and a Half Men featuring Charlie Sheen’s funeral airs Sept. 19 — not coincidentally the same day Charlie Sheen’s roast will air on Comedy Central.

Charlie Sheen is in Anger Management