Jennifer Lopez is talking about how hard her marriage was just before she and Marc Anthony announced their split — and we have the Vanity Fair interview. 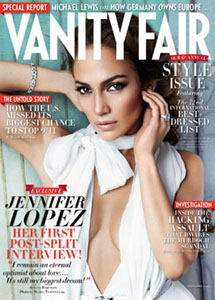 Jennifer Lopez sat down with Vanity Fair to talk love and marriage just before she and soon-to-be ex Marc Anthony announced their impending divorce, and she gave serious clues as to why they split.

She says it was all good when she was playing happy housewife, but once her career began to ramp up again he couldn’t handle it.

“It’s getting increasingly harder,” Jennifer Lopez said. “When we were [first] married, most of the time, and even before the babies were born, we were able to go everywhere together. I wasn’t working as much. So we kind of had that. I went on tour with him a few times in the first few years of our marriage, and we did a film [El Cantante] together. It’s hard, and we’re figuring it out. It’s tough.”

In fact, rumor has it Lopez almost dumped Anthony last year — and things have only gotten worse since then.

“Everything is ramping up in a way. Like I said, we had the first three years of our marriage just for us. I wasn’t working, it was mainly about him. Then we got pregnant. Then it became about the kids. And then I started working again,” she said.

So when it wasn’t all about him anymore, the marriage fell apart? Sounds like she’s better off without him.

Vanity Fair went back to Lopez for a comment after the split was announced. “This was the hardest decision I’ve ever had to face,” she said.

“I love myself enough to walk away from that now,” she said.

“I really wanted this family to work. That was my biggest dream, and I worked hard at it. We both did. Sometimes it doesn’t work — and that’s sad. But I remain an eternal optimist about love. I believe in love…it’s still my biggest dream.”

Jennifer Garner better lock up that husband of hers, bad haircut and all.

Read the full interview in the new issue of Vanity Fair hitting newsstands this week.