DJ Samantha Ronson was arrested on DUI charges Monday morning on her way home from a gig in Las Vegas. 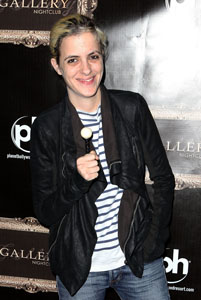 Ronson was on her way home from a gig in Las Vegas when cops pulled her over in her black Porsche for speeding. After failing a field sobriety test Ronson refused a breathalyzer — instant cause for arrest.

Ronson was brought to the local Barstow jail where she finally consented to a breathalyzer — and blew over the legal limit.

The DJ was coming home from a gig at Lavo in Las Vegas when she got pinched. No word on who picked her up from the pokey, but chances are it wasn’t her ex-girlfriend and next door neighbor Lindsay Lohan, who has been much too busy partying with Paris Hilton to spare that kind of time. We’re sure Lohan will have lots of advice on how to deal with the court system, seeing as how she has so much experience with it herself.

Requests for comment from Ronson’s rep were not returned, and Ronson’s normally active Twitter has been on radio silence all day.

Read on for more Samantha Ronson