From slinging insults on E!’sThe Soup to wooing co-eds on Community, funnyman Joel McHale is on fire. And now, with his 40th birthday on the horizon, he’s headed for the big screen in Spy Kids: All the Time in the World 4D.

Community’s Joel McHale has achieved the coveted career move of celebrity commentator turned actor. What more could a guy ask for? 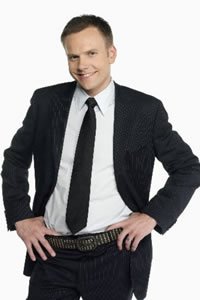 “I just want to get a really great sports car,” McHale told SheKnows at the Spy Kids 4 junket. “I better before it looks like I’m going through a mid-life crisis.”

McHale turns 40 in November. But with two kids, a beautiful wife, and a flourishing film career, it doesn’t look like a psych ward will be entering the picture anytime soon.

Still, with all that he’s got going on, many people are speculating that he’ll have to quit his day job (The Soup) sometime soon.

“I love doing The Soup so I have no plans to stop,” McHale told SheKnows. “It depends on what happens, if people will start watching Community. And if this will be the biggest movie of the year, because I plan on that.”

When he does have an ounce of free time, Joel spends it with his kids.

“I’m so busy,” McHale told us. “Community is very demanding on the time. I would like to stop time and go hang out with the boys.”

To make up for being M.I.A. on set, McHale said he tried swiping some Spy Kids gadgets for them.

“I tried to stuff some in my shorts but they caught me,” said McHale. “Security was like, ‘Drop the mechanical dog!'”

Spy Kids: All the Time in the World 4D hits theaters Aug. 18.