On the brink of giving birth to her second child, a super-pregnant Jessica Alba sat down with SheKnows to talk about her role as a spy-turned-stepmom in Spy Kids: All the Time in the World 4D.

Jessica Alba looked beautiful but exhausted, sitting under glaring lights in a hotel room in downtown Los Angeles recently, waiting for her umpteenth interview of the day at the Spy Kids 4 junket. 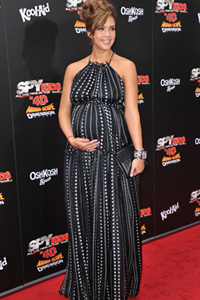 “It’s a little bit different when you’re super-pregnant and sitting and doing interviews than not,” Alba lamented to SheKnows. “Your energy level is different. Your body feels different.” (The actress had a healthy baby last saturday, congrats!)

Still, the usually upbeat actress managed to put on a smile for SheKnows while telling us how well her second pregnancy had been going.

“All in all I’ve been pretty lucky, I’ve had a good pregnancy,” said Alba. “My body has done it before so it sort of knows what to do now.”

She also has 3-year-old daughter Honor Marie to help. Alba told SheKnows Honor is one of the reasons she chose this role.

“I wanted to play a mom in a movie and I really wanted to be in a kids movie,” said Alba. “So this is the best of both worlds.”

So what does Honor think of mommy playing a spy?

“I’m not sure,” Alba laughed. “She’ll either think it’s ridiculous that I play dress up and I’m pretending to be a spy, or she’ll have fun with it.”

Spy Kids: All the Time in the World 4D hits theaters Aug. 18th

Jessica Alba to play a mom in Spy Kids 4