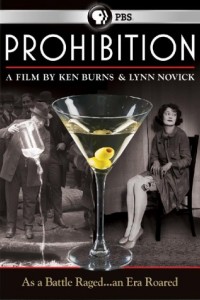 “The conventional image of the prohibition era is, of course, the rain-slicked Chicago streets around which the Model T is careening, machine guns blasting; or the flapper who is shimmying in her miniskirt with her bobbed hair,” Burns said. “We have a lot of that, and it is very exciting and sexy violent.”

As any fan of the Burns documentary series anticipates, however, there’s a big but to that introduction.

“We felt that the story that we told had also encompassed other things, and indeed our whole first episode details the century of events that led up to Prohibition,” he previewed. “The second and third episodes cover the 13?plus years that Prohibition was in effect.”

While one reporter at the TCA press tour noted parallels between today’s Tea Party and the history of Prohibition, Burns insists this documentary series is an historic venture, not political. Nonetheless, he recognized that there are patterns and general political lessons to be learned through history.

The Prohibition story takes on timely topics, including, “single-issue political campaigns; wedge-issue campaigns that metastasized with horrible unintended consequences; the demonization of recent immigrants to the United States and, as always African Americans; smear campaigns during presidential elections or un-funded congressional mandates or, more importantly, a whole group of people who felt they’d lost control of their country and wanted to take it back.”

While Burns hopes the film will get viewers thinking, he insisted he has no agenda.

“We are not political filmmakers,” Burns said. “We don’t have a political ax to grind. We leave it up to our audiences to forge those connections… What we begin to understand is the study of history provides us insight and helps at least arm us to deal with more compassion, with more tolerance, all the undertow that we perceive today in our political circumstance.”

Prohibition will air on PBS on October 3-5.